Hove is covered by Gary the Chimney Sweep

Great news! Gary the Chimney Sweep is available to work in Hove, remember I can help you with any of the following:

Hove, strongly associated with nearby Brighton, with whom it is a unitary authority, is a relaxed settlement nestled by the English Channel in East Sussex. Famed for its wide boulevards, and Georgian and Victorian architecture; for many years, it was an insignificant village with just a single street and St Andrew’s Church. There were just 101 residents recorded in the 1801 census. Stages of development, however, expanded the town and these days, Hove retains a unique identity. George Street, the main pedestrianised shopping street, is popular for both residents and visitors. There are also some superb restaurants, a pleasant seafront and great transport links. More than anything, it is Hove’s architecture, with rooftops and chimneys galore, which are pleasing to the eye.

Hove is definitely a splendid city location, which enjoys grand architecture as depicted in the names of streets such as Goldstone Villas, Denmark Villas, Clarendon Road and Nevill Road, as well as Clarendon Villas, which becomes Portland Road that leads to Aldrington. Church Road contains a delightful array of individual shops and there is a coastal strip link with the Old Shoreham Road. Perhaps most intriguing is a spread of roads with a literary tinge in the etymology such as Wordsworth Street, Coleridge Street, Byron Street, Montgomery Street, and Cowper Street.

Hove does retain an individualistic character despite being linked so closely to Brighton. The tall architecture nearer the seafront creates a sense of respectability. Shops, especially in George Street aforementioned, offer a wide range of goods and there are plenty of restaurants and cafes to appease appetites with various cuisines offered. Nevertheless there is a sense of the older Hove, which peeks out amongst the modernity, whether that be houses of yesteryear, or family-run retail outlets and individual market stalls, which have been there for years or the archaic quality of the town hall’s frontage. The seafront too evokes, naturally, a sense of timelessness and is a reliable setting to rest the mind while enjoying a walk along the promenade. Hove is a comfortable place of residence, which nodes approvingly at the future but still retains a sense of satisfaction about its long history.

Sir Winston Churchill was a pupil at a preparatory school based in Brunswick Road, Hove. The school was based at numbers 29 to 30 and it was thought that the fresh sea air would be good for Winston’s fragile health as a youngster. He was a pupil between 1883 to 1885 at the school, under the care of Charlotte and Kate Thomson, two sisters, who showed him great kindness. At the time, the school was in fact on the outskirts of Hove, which was still being developed into the modern set-up known today. Winston himself recalled happy days at his school in Hove. He said: “I was allowed to learn things which interested me: French, history, and lots of poetry by heart, and above all riding and swimming.”

Another very famous figure with a strong link to Hove, although it is not clear from his lifetime why, is George Everest, from whom the highest mountain in the world is named. He was the Surveyor-General of India and his remains were buried in Hove. He was interred at St Andrew’s Old Parish Church on December 8 1866 after passing away in London.

Hove’s residents are known for their friendly streak and also their humour. This has been exemplified with the phrase ‘Hove, actually’. It was invented possibly by Laurence Olivier, the famous actor, who was a resident in Brighton. The logic goes that people in Hove like to distinguish Hove’s separate identity to its formidable and culturally dominant counterpart, Brighton. So, if anyone asks if they are living in Brighton, the reply given, tongue-in-cheek, is ‘Hove, actually’. Thus the visitor will gain a sense of the unique identity of Hove in a non offensive manner.

Hove seafront is a wonderful stretch of urban land hosting a promenade and stretches of lawn with the pebbled beaches fluently bordering the mysterious allure of green and blue waves crashing back and forth from the English Channel. A good starting point for a ramble is Hove Lawns, which reaches up to Hove Lagoon, not far from Portslade. The lawns are a great picnic spot on a sunny day and the prom by the Kingsway, right on the seafront, witnesses a wonderful array of walkers, cyclists, and roller skaters of all ages taking their time to enjoy the salted fresh air, and sights and sounds with Brighton in view. Hove Lawns are near Western Avenue. Hove Lagoon caters for a wide range of watersports, for both youngsters and adults, such as wakeboarding, kayaking and windsurfing. Hove Lagoon Model Yacht Club is based at the lagoon, where it has been sending off model boats on the waters since 1930.

Hove’s contribution to the defence of Britain was outstanding in both world wars. Some 600 men were killed in the First World War and Sir Edwin Lutyens, who created the Cenotaph in London, was called upon to creare a similar structure for Hove. His initial wooden model was rejected by the local committee and eventually a design was agreed for a St George statue on a column in Grand Avenue, now Grade II listed. This memorial is now the focus of remembrance services for the residents of Hove, who will never forget the sacifices given by their loved ones and fellow townsfolk in defence of their country. Hove Library contains a bronze plaque upon which are the names of the deceased.

Sport is a popular pastime in Hove and the Sussex County Cricket Club, based at the County Cricket Ground, is particularly popular with residents and fans from further afield. Matches played at the cricket ground involve not just county level but also national and international games. The facility is also used for events such as fireworks displays and concerts. Brighton and Hove Albion Football Club was based at the Goldstone Ground until 1997 and the club moved from Falmer in time for a first game in 2011. Another sport in Hove is hockey and the Brighton & Hove Hockey Club has a home ground in the town. Swimming facilities are provided at the King Alfred Centre. 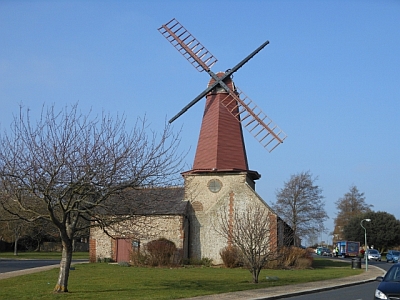 Windmill in Hove. Photo taken by Gary the chimney sweep.

Looking for a chimney sweep in Hove?

Gary the chimney sweep is availabe in the Brighton and Hove area.

Places near to Hove that we also cover

We are letting agency based in Brighton. We manage properties in Tunbridge Wells, Sevenoaks, Eastbourne, Crawley, Brighton and Hove. Since Gary the chimney sweep swept one of our properties in Brighton, we have asked him now to sweep all our properties every year. He is honest is always happy to come to the office, collect […]